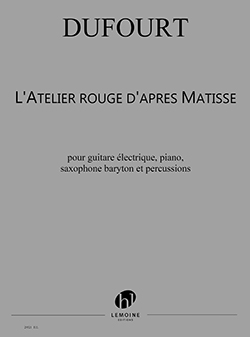 L'Atelier rouge after Matisse
A large-format oil painting on canvas, (181 × 219,1 cm), L'Atelier rouge by Henri Matisse, is one of his Intérieurs symphoniques, a group of four paintings done during the spring of 1911 for the modern art collector Sergei Ivanovich Shchukin. L'Atelier rose belongs to the Pushkin Museum of Fine Arts, in Moscow. La Famille du peintre now hangs in the Hermitage Museum in Saint Petersburg. Intérieur aux aubergines joined the collection of the Museum of Grenoble in 1922. L'Atelier rouge can be found at the Museum of Modern Art, in New York.
A basic spatial layout, and an imagery of coloured rhythm of Chinese, Japanese, Indian and Persian inspiration, demonstrate Matisse's rejection of the occidental past. In 1908, the painter wrote "A work's meaning should be clear to the viewer even before the subject has been identified". According to Matisse, painting communicates through colour, which becomes the primordial element. L'Atelier rouge can be resumed as a large flat tint of pure strident, colour, where the impression of depth vanishes, relationships of position are supressed, and techniques of construction fail. Contours are liberated from the restraints of chiaroscuro and the line is implied with a sort of feigned naivety or calculated awkwardness tending toward decorative abstraction.
In Notes of a painter, from 1908, Matisse writes that the simplification of ideas and figurative forms should result in a harmony "comparable to that of musical composition".
The score that was inspired by, and named after, L'Atelier rouge, is a commission from the Nikel ensemble, to whom it is dedicated. Written for saxophone, electric guitar, percussion and piano, the piece evolves through unusual combinations of timbres: saxophone multiphonics, amplified waterphone, a noise setup for the guitar and sounds produced inside the piano. Traditional forms of discourse are subjected to the context's deformative actions and are assimilated into another logic, that of pure tension.