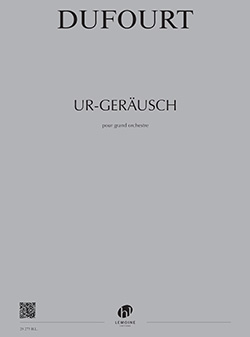 A pioneer of the spectral movement, Hugues Dufourt examines the utilization of sound, through its nuances, folds and densities. Obsessed with painting - to which he devoted the cycle Hivers -, Hugues Dufourt is equally so with the cosmological perception of a work. Starting in 1979, Saturne, for instrumental ensemble, electronic instruments and percussion, internalises the musician's questioning of his epoch.
Premiered in Germany for the Beethovenfest (Beethoven Festival), Ur-Geräusch returns to these preoccupations. Much as Luigi Nono, via the work of Mahler, probed the idea of a "primordial sound", the work takes its title from the German poet Rainer Maria Rilke who, in an essay on the gramophone in 1919, imagined a primary noise inscribed in each being. But Ur-Geräusch is also an homage to Beethoven and to his Symphony n. 3. "The Third Symphony, writes Hugues Dufourt, shatters the structure of the classical symphony. It incarnates a new epoch in people's minds. History intercedes in the work, taking over the entire range of human action and thought. With Beethoven, European music calls into question its meaning, its technique and its history. Symphonic writing ascents to a new and original vision of the world, to a consciousness of the historical timeframe and can no longer, from then on, be separated from its own reflection upon itself. The era that separates us from Beethoven is one of the darkest in human history. Of traditional heritage, the programming of the beautiful and the instructive communication that characterizes the second half of the last century, almost nothing remains. The reserves of pathos have been exhausted and sound hollow. Today, an oeuvre oscillates between a game of appearances and the enigmatic levelling of the very sense of things. These are some of the ruptures that Hugues Dufourt puts into play in Ur-Geräusch: the remembrance of Beethoven expands into a cosmic conception of the orchestra where Dufourt brings forward "the sensation of limitlessness, the access to the night and the murmur of epochs past."

Charlotte Ginot-Slacik
Excerpt from the program for the concert at the Paris Philharmonie on Nov. 18, 2016