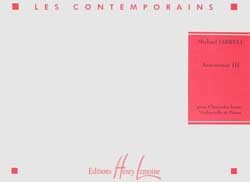 In their diversity, the first three pieces on this programme, written between 1989 and 1996, display many similarities and qualities that can, moreover, be spotted in Michael Jarrell's work. The attraction of dilated playing times in which is posed sound matter that is worked and refined, an alloy of shadow and sparkle, the mutation of this fluid matter towards phases made denser, in which beat and agitation are substituted for dispersal, the sensuality of the sound curves, the predominance of low tessituras and the correctness of proportions are part of the composer's arsenal.
So it is with Assonance III, which belongs to a vast series that now includes some ten numbers, or sketchbooks, from the initial piece for solo clarinet, which was the 1983 prize-winner of the Acanthes composition competition in Paris, up to the Concerto for Clarinet and Orchestra (Assonance IX, 2000). Assonance III - brilliantly interpreted here, like the other works on this programme, by the musicians of the Ensemble Accroche-Note - is an ideal illustration of Jarrell's way of making music and the balance between acoustic properties and formal development. Beginning with brief cells prolonged by natural resonances, maintained by a subtle interlacing of trills, harmonic notes, battements or plays on the sound matter, the score becomes progressively denser, alternating chiselled phrases and more immobile plateaux until, two thirds of the way through, it reaches the high-energy climax that precedes a return to calm. The listener is awed by the score's sense of proportions and nuance, the refinement and mastery of the instrumental art and, finally, the impression it gives of freedom combined with fieriness.