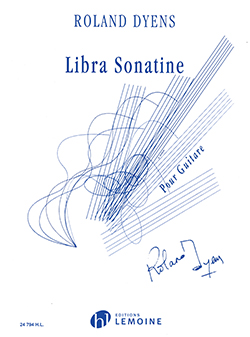 Although very different from the Tango en skaï, this piece has also brought me a certain measure of fame as a composer, and has been recorded dozens of times. It was originally written for guitar, double bass and percussion, following a major operation I underwent in the early 1980s. Its three movements are an explicit portrayal of that very particular period of my life: first the chaotic India (before the operation), then the Largo (during it) and finally the Fuoco, in which the unrestrained rhythms depict a veritable incarnation of my return to life (and several guitarists often play this last movement as an independent piece). I can but be grateful for the success of the Libra Sonatine, a triptych which has familiar sounds for today's youth at the crossroads of this new and changing century.