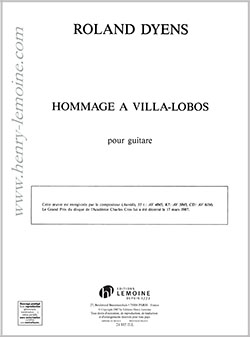 As a musician, I found that the music of Heitor Villa-Lobos "spoke" to me early on and had a profound effect on me. And it is not difficult to recognise the influence of popular Brazilian music (from which Villa-Lobos himself emerged) on my early compositions and performance. This homage, in the form of four tableaux whose titles make use of word-play, describes, in its own way, the passion of a French musician for the immense creative spirit that was Villa-Lobos, and, through him, for the whole of Brazil.