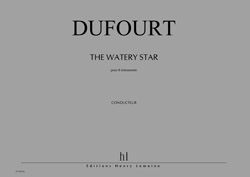 Written for eight instruments, The Watery Star is marked by minimalist poetics. The watery star, a title borrowed from Shakespeare and mentioned in Panofsky's book on Dürer, signifies a particular melancholy for which I endeavoured to find stylistic equivalents of colour, texture and especially space, a floating suspended space, crossed by the incessant movement of expansive sonorities. Minimalist, the approach lies principally in the refusal of a formal or artificial conception of artistic action. Denouement and plenitude, transparency, contour and depth, such are the types of tension that animate the antagonistic osmosis of the hot and cold coloured fields.
Minimalist, the musical process is also, following the example of Frank Stella's black paintings, Donald Judd's essential arrangements or Larry Bell's dematerialized complexes, focused on the reduction of means and the quest for critical points.
This work of chamber music confronts the problematic of current art that, in various forms, manifests both primordial terror and elementary exaltation. The explicit symbolism of the liquid star is thus inscribed in the implicit symbolism of the musical construction: harmony, timbre, agogics disappearing within a play of perspectives, in an omnipresent background, diffuse and unattainable, split between emptiness and total unity.
The piece is dedicated to Dominique My.

Hugues Dufourt
Translated from the French by Jacqueline Rose