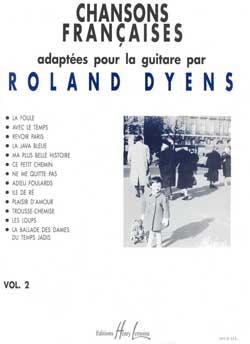 I won't beat about the bush: these arrangements are not easy. But can anyone tell me how, with just six strings, you can stay in the original key and bring out the melody, while simultaneously providing an accompaniment that accurately represents the original orchestration, without paying the price of technical diﬂiculty? A duet version would solve many problems, but as the rule here is to write for guitar alone (or a lone guitar, some would say), you will soon see that most of these pieces are pretty difficult.
They are published in two volumes (for in spite of everything, the first was so successful that it spurred me on to a second), and represent some of the ﬁnest French standards even written. They should be considered as recital items on their own account, and, if the mood takes you, they can he included in concert programmes like the Catalan song arrangements of the great Miguel Lobet.