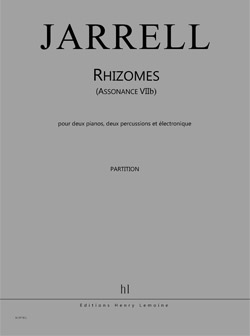 to Milan and Luca

The word "rhizome" is a botanical term referring to the underground travelling stem. From one end grow new branches and new leaves, while the other end withers. As is demonstrated by its etymology, it is a root. But the word rhizome is also used to describe a philosophical concept developed by Gilles Deleuze and Félix Guattari, notably in "Mille plateaux". Following a quotation from a work for piano by Bussotti - which would seem to imply a probable musical connotation - the analysis of the concept stresses the inherent principles such as connection, heterogeneity, multiplicity and non-significant rupture: "A rhizome has no beginning and no end. It remains in the middle, among things, an intermediate being, an intermezzo. A tree infers the presence of branches but necessarily implies the verb to be, whereas a rhizome is built out of connective tissue "and... and... and..." there is sufficient combined force to shake and even uproot the verb to be". In its attempt to extract itself from the compulsory reference to the ideas of Deleuze, and to return to the reality of the philosophical writings and the ramifications of generative grammar, "Rhizomes" realizes the conjunction of the organic and the biological, the simultaneity of different periods, times and tempi by borrowing its substance from Assonance VII (1992) in addition to a percussionist. At the same time it explores the continuity of form and timbre, binding and blending the mobility of the percussive universe with its tam-tams, cymbals, gongs, maracas and bongos, with the inflexibility of the temperate universe.

Laurent Feneyrou, extract from the booklet (CD Accord)
translated by Mary Criswick