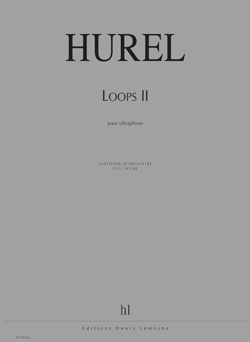 I wrote earlier about Loops I for flute that "the sound of the flute and its techniques are of less importance than the transformation procedure at work. The principle of the style of the piece is contained in the title which, when "looped", creates its own alliteration, and this spirit will colour a whole series of pieces based on the same principle. I start with little rhythmic motifs that are repeated and transformed as they progress. In fact, they are simple formulas which, by adding or taking away from themselves, end up creating further loops."
In this new Loops, written at the request of the Clermont-Ferrand International Vibraphone Competition, I have added an extra level to the principle of looping. The piece is so constructed that the process of cell transformation always brings you back to the motif announced at the outset. Although the music may seem to be undergoing perpetual transformation because of the morphing process, the listener will nevertheless feel it is going round in circles, since each long procedure brings you back to the starting point, like the little local loops that you can hear throughout the piece. As the work was intended to be used for an advanced-level vibraphone competition, I thought about introducing more difficult playing techniques than in Loops I for flute. Although I had no desire to use the instrument in ways not intended for it, I did want the performer to get to grips with a variety of techniques in a virtuoso context. For example, the piece ends with a long section in chords, which on a compositional level cannot be justified. This section - like other, very different sections in the work - acts as a "study" and involves the performer in specific technical study. Despite which, Loops II remains a very playful piece full of rhythmic energy, and I wrote it in a spirit of great pleasure and jubilation. It constitutes another stage of my work on percussion, and on the vibraphone in particular, which was begun in 1996 with ...à mesure, where the vibraphone plays a dominant role, and continued in 1999 and 2000 with the Tombeau in memoriam Gérard Grisey and the Quatre variations for percussion and ensemble, in which the vibraphone takes on the role of a concerto soloist.