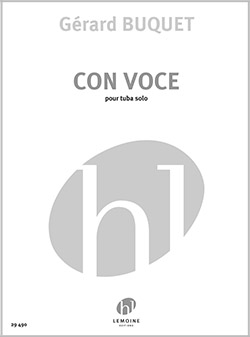 Con voce for tuba solo, has been composed for the Geneva International Tuba Competition and takes into consideration the aims of the competition but is also intended for young musicians. I wanted to present and share a contemporary musical language that which has enriched my musical career and that which refers to three important composers of the second half ofthe 20th century to whom I wish to pay tribute: Helmut Lachenmann, Gérard Grisey and Pierre Boulez. These composers have helped to expand the playing techniques and repertoire of the tuba.
Con voce is dedicated to Fabien Wallerand, to Swisstuba.ch and to the young tuba players taking part in the Geneva International Tuba Competition in January 2020.