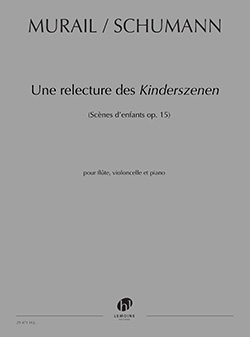 [...] Finally, to illustrate the encounter that is the theme of this album, the idea developed, and quickly took hold, of my making an instrumentation of a piece by Schumann that would establish the most obvious link between the two sound worlds. This work would of course be written for the three partners on the disc, cello, flute and piano. It quickly occurred to me that the Kinderszenen (Scenes from Childhood) would be perfect for this project. In fact, Scenes from Childhood has musical, expressive and evocative potential that far surpasses Schumann's version for piano. He no doubt wanted to remain "simple" and "easy" - in his mind, the pieces would be playable by children. I am not sure that is true... some pieces are not so easy, others require stretches beyond that of a child's hand. But, almost all of them are little masterpieces, with great inventive power, based however on simple and concise ideas.

How would this realization be approached, or rather what would "reinterpretation" mean: one composer's take on another composer? I quickly put aside the idea of instrumentation in a plausible "period style" - that would hardly have enhanced the original pieces, much as an overly thoughtful "rewriting" risked becoming untrue. In the end, I tried to provide "colouring" for Schumann's pieces (just as old black and white films are now sometimes "colourised"), amplifying the ideas and feelings, while remaining as faithful as possible to the letter and spirit of the score. I thought about, all things equal besides - because we are not at all on the same level here - the magnificent example of Pictures at an Exhibition orchestrated by Ravel. Ravel did not simply "orchestrate" the piano, he tried to discover the very essence of the musical ideas hidden behind Mussorgsky's pianistic version, which in fact was clearly only one of many possible versions.

Based on these reflections, for my vision of Scenes from Childhood, I did not hesitate to use the entire modern palette of instrumental techniques, thus multiplying available timbres and the acoustic effects resulting from their combinations. The flutist often plays the alto flute, with its warm and expressive timbre, and whose low register allows the cello to sing the upper voice in some places. The cello is used with all of its articulation, timbre and register options, changing very rapidly from one playing mode and sonority to another. Reutilizing an approach to the instrumentation that I have already implemented in pieces such as La Barque mystique, I make each instrument change roles quickly, giving the illusion of an orchestration much ampler than a simple trio.

I tried to emphasize the character of each piece, and to reveal the intentions behind the simplicity of Schumann's piano, thus obtaining contrasts that the original version does not allow - or allows less. To bring out the "childish" or enchanting quality of the music, I made use of several additions, that I will evoke later: nevertheless, I wanted to respect the text completely, in the sense that not a single note is missing from the original score, that the tonal harmonies are completely respected, the same for the rhythmic writing. On the other hand, with the performers' approval, we did not always follow the tempo markings indicated by Schumann, which often seem too fast (there are in addition several contradictions between Schumann's comments on the pieces and the tempi indicated). The original pieces, probably for the reasons mentioned above, are limited to the medium and medium-low registers. I decided to make them more "luminous" in some places, adding high resonances or doublings, or on the contrary, adding several lower notes to give the sonority more "body".

It is thus a strange sonority (bisbigliando on the flute, harmonic trills on the cello) that introduces the first piece, then soars above it (Von fremden Ländern und Menschen = Of Foreign Lands and Peoples), that Hasche-Mann (Blind Man's Bluff) becomes even more furtive, while Knight of the Hobbyhorse (Ritter vom Steckenpferd) chatters, sighs and whinnies. Fürchtenmachen is really frightening! In the ultra-famous Dreaming (Traümerei), after the announcement of the theme in the cello's expressive upper register, the piano suddenly becomes dominant, as in a romantic concerto. As I said earlier, several "childish" elements are added to the sonic storyline from time to time: a little music box (high in the piano) in the first and last piece, percussive col legno on the cello in Wichtige Begebenheit (An Important Event) - transformed for the occasion into a military march for tin soldiers... And finally, the child falls asleep (Kind im Einschlummern), lulled by the cello shifting between ponticello and ordinario, and comforted by the breathy sounds of the flute... I hope that listeners will share the pleasure that I had in imagining this reinterpretation, and that we have had in recording it. Many thanks to the three performers Marie Ythier, Marie Vermeulin, and Samuel Bricault, for their enthusiastic participation in this project, and for their numerous and thoughtful suggestions.