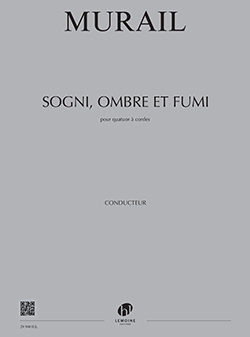 Songes, ombres et fumées: the title is taken from a verse in Petrarch's Sonnet 123 (one of the sonnets that provided inspiration for three pieces in Liszt's Années de Pélerinage). These words also appear in La Vallée Close, sur des sonnets de Pétrarque, for voice, clarinet and string trio that was written the same year, in 2016.
It is above all a work concerned with "grand form"; an immense trajectory that crosses numerous territories, backtracks, anticipates... There are allusions to traditional forms: central adagio, final rondo - but everything intermingles, with the various textures and musical ideas in continuous confrontation between themselves.
All of the little devices that distract from the greater question, are rejected - the question posed by a musical form as historically encumbered as the string quartet; are thus avoided, all of the crushed sounds, diverse small noises and harmonic gurgles that abound in contemporary quartets. Also avoided, is segmentation into a succession of short movements, to favour the continuity of discourse.
The theme, as the title suggests, is melancholy - deep and persistent melancholy. A set idea (steady pizzicato pulsation) punctuates the score, clashes with other musical elements, and prevails in the end. All along this trajectory are visions, hallucinations, phases of depression and elation, of renunciation, of hope, of anger, of revolt, that suddenly surge forth... "sogni, ombre et fumi..."