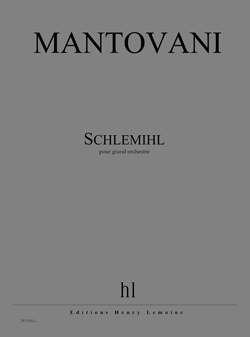 This piece is indeed a tone poem with allusions to Strauss (the orchestral composition Ein Heldenleben), and the theme found in Chamisso's book: Peter Schlemihl's Miraculous Story. The narration is not linear, but rather, metaphorical (in this sense, the model leans more towards Hamlet by Franz Liszt). In fact, the discourse vacillates between luxuriance (symbolising the infinite wealth of Chamisso's hero) and rarefaction, aridity (the growing psychological vacuum of this same hero). Though the language is modern, there are several references in this homage to Strauss (the use of the horns, for example) and above all, a dramaturgy based on contrast.
Strauss is a composer who has always obsessed me, in particular for his orchestral hedonism. He greatly influenced Edgar Varèse, who, for me, is a constant reference. It is this composer's sonic opulence, that was, in part, my inspiration for Schlemihl.