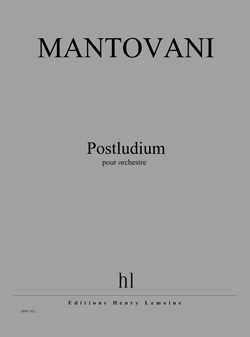 With his new work Postludium, Bruno Mantovani proposes a prolongation to his opera Akhmatova. With its condensed musical language, and quick rippling gestures, it is not a question of a conclusion, but rather a commentary, another point of view.
"By not deriving its material from the vocal score (aside from the initial chaos derived from the last sung scene in the opera), this postlude synthesizes and opposes two aspects of my heroine's life: action pushed to saturation (Akhmatova lived through both world wars as well as Stalinism) and the contemplation related to poetic introspection." Still haunted by the figure of the poetess, Bruno Mantovani adds: "You do not suddenly break off with someone with whom you have shared two or three years of your life (not in the artistic domain in any case)!" Composed after a ballet (Siddhârta, 2010) and an opera, this new symphonic work presents refined gestures, an expressionism rooted in a cold and abstract lyricism. "A form of refusal of the obsession with pretty sound, something raw, in the first section in any case, violent energy that tends toward filtered saturation in the first part, and is transformed into refinement, into sparse discourse in the second."
Seeking a renewal with poetic introspection, in the second section of his work, Bruno Mantovani proposes a pursuit of contemplation, which in this case concerns "the oasis for writing that Akhmatova had to create in the midst of the social tumult in which she manoeuvred". Artistic contemplation calls for meditation. Serene and attentive listening or the exercise of grace, contemplation moves through this moment where time stands still. This is what Bruno Mantovani seeks through this prolongation, this "musical postscriptum". A pursuit with borders being nothing other than distant lands, the spirit's immobile wandering through nature itself, contemplation is a spontaneous means of embracing earthly beauty.