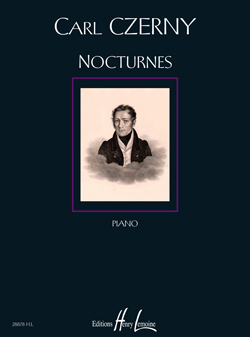 Carl Czerny (1791-1857), the Viennese composer and pianist, produced a remarkable number of scores. They cover all genres except opera - most are for piano (or piano with other instruments). He published no less than 861 opuses (using 30 opus numbers more than once) as well as a large number of compositions without opus numbers (Werke ohne Opusnummer). In his monumental "Universal Handbook of Musical Literature: a practical and complete guide to all classical and modem musical publications from all countries" (1904-1910), Franz Pazdirek mentions 381 and, despite the title, his listing is not complete. As if that were not enough, Czerny also left behind a significant number of nonpublished manuscripts, probably amounting to several hundred works.

It is difficult to make sense of this overwhelming mass of scores. Czerny himself divided his music into four categories: exercises, easy music for beginners, brilliant music for recitals, and serious music. It is nevertheless not always easy to know which heading a given composition should be classified under.

Among the nocturnes in the present edition, five opuses include the word "Nocturne" in their titles. Such is the case for opus 368, 604 and 647, the seventeen nocturnes recorded by Isabelle Oehmichen (Editions Hortus). These are indisputably "serious music". Opus 253 is called "Le Golfe de Naples, Tableau Nocturne or Fantaisie Pittoresque". Might it be a nocturne? Undoubtedly. In any case, it has been included in the edition, and is definitely serious music. Opus 537 is a "Sentimental Nocturne on a theme of Strauss", inspired by Johann Strauss Senior's "Alexandra" waltz. Though it is not a totally original composition, Czerny's development, far removed from Strauss, calls for it to be considered as a Czerny nocturne. It is interesting to note that this composition, by title, should be part of the brilliant music category. Not serious then? Each person will have to decide for him or herself.

Next we come to the mixed opuses, with only one piece referred to as a nocturne, though this word does not appear in the opus heading. Opus 506 comprises three rondos inspired by Daniel-Francois-Esprit Auber's opera "Le Domino Noir": "Rondo scherzando", "Rondo sentimental" and "Rondo nocturne" - only the third has been included. Opus 699 (1) consists of four numbers: "Impromptu martial", "Notturnino", "Studio scherzosa" [sic] and "Tarantella" - number 2 has been included. The compositions from "Trois Bluettes de Salon", opus 728, are entitled "Romance", "Etude harmonique" and "Nottumino harmonique" - the notturnino is replicated here. Opus 756 consists of twenty-five "Grand Etudes de Salon" - number 14 is entitled "Notturnina" (oddly feminised). We assume that Czerny would have classified this nocturne as an exercise, even though its romantic musicality is obvious (and thoroughly serious).

The nocturnes from the mixed opuses are difficult to identify whenever this key word does not appear in the title. Ideally it would be necessary to examine every score of every piece to find each one that is called a nocturne. This is no small undertaking! To the best of our knowledge, no archive in the world possesses the complete works of Carl Czerny, or even all of his 861 published opuses. We have done our best to locate all of the "interior" nocturnes, but unfortunately we have not been able to consult notes from all of his oeuvres. It is therefore possible that several nocturnes have yet to be unearthed, hidden within obscure opuses.

We also discovered two nocturnes among the compositions without opus number. They were published in the Wiener musikalisches Pfennig-Magazin, a Viennese journal edited by Czerny during the three years in was in existence (1834-1836). In contrast to the opuses, we do not know how many WoO exist, whether published individually or in various journals. This leaves the distinct possibility that other nocturnes will surface some day.

There is one rather unusual case, a "Sentimental Nocturne" [sic] found in an album called "The New Czerny", a selection of works by Czerny published again in 1931 in England. Alec Rowley and Ernest Haywood, who directed this anthology, state in their introduction: "The goal of the present edition is to counter the idea that Czerny's etudes are "dry", by giving them titles so well suited to the music itself, that the student's imagination and creativity will be stimulated..." One could believe that Czerny himself may not have called the work in question a "nocturne", though this music is of a sentimental and profoundly romantic character. Unfortunately the volume does not provide references to the selected compositions and, despite considerable effort, we have not succeeded in identifying the piece and the original title of this "sentimental nocturne". Given a doubt, it has not been included in the current edition.

There are several Czerny nocturnes for solo piano that are transcriptions of music by other composers. He published two nocturnes (without opus numbers) transcribed from two romances that Heinrich Wilhelm Ernst composed for violin and piano (his opus 15). He also transcribed (again without opus number) the "Soirees de Paris: Album d'Ariettes et de Nocturnes italiens" that Gaetano Donizetti composed for voice and piano. In any case, Czerny's role was solely that of a transcriber - he did not alter the themes, adding neither variations nor fantasias, his transcriptions are highly precise. Since these works contain no imprint of Czerny the composer, they have not been included in this album.

There is no general catalogue of Czerny's unpublished manuscripts. The Gesellschaft der Musikfreundein Vienna, to which Czerny bequeathed all of his documents and which possesses over one hundred of his manuscripts, does not have a single nocturne. A great number of the archives, libraries and publishing houses consulted online or by correspondence also do not have any but, as for the WoO, it remains possible that an unpublished nocturne by Czerny will one day be found in some nook or cranny.

This new edition presents all of the known nocturnes composed for solo piano by Carl Czerny. Czerny (2) also composed at least five nocturnes for four-hand piano (opuses 71, 165, 647 in a duet version and two WoO) and four nocturnes for piano and ensemble (opuses 95, 165 in a version for with horns and two WoO). These scores are not currently available for sale.

The scores presented here are based on original editions (3), almost all of which we redeemed from total and undeserved indifference. They were found in four great libraries - in Paris, Berlin, London and Chicago - and their composition spans the period from 1831 (opus 251) to 1845 (opus 756).


(1) "Opus 699" also refers to the 50 famous etudes called "The Art of Finger Dexterity" (Die Kunst der Fingerfertigkeit), published as opus 699 or 740
(2) Pazdirek (op. cit) mentions one WoO by Czerny called "Attente, nocturne" but there is no trace of that work elsewhere. The French composer Alexandre Edouard Goria, who lived for some time in Vienna and knew Czerny well, published a nocturne in 1847 called "L'attente", his opus 10. It is thus probable that Pazdirek's indication is erroneous.
(3) That of "Nocturne sentimental" based on a new edition from 1931, being the sole exception.