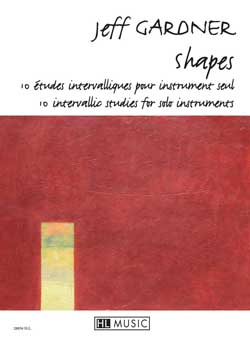 We are told that Debussy, when asked which harmonic system he followed to create his compositions, replied, "my own pleasure". The pieces herein are based on free motivic variation.
While some of the techniques used - inversion, retrograde, and retrograde inversion, are associated with serial or dodecaphonic music, these pieces are definitely not serial in a strict sense. Nor are they atonal or tonal. I have looked for a language which grows from freedom of expression rather than adherence to any one set of rules or parameters. There are rhythmic echoes of jazz and blues in some of these pieces, as well as colors of 20th century contemporary / classical music (what is contemporary? in which year? to whom?).
Tempo, dynamics, and articulation have largely been left open to interpretation by the player(s). I hope you enjoy these musical games or journeys - may they take your music into some new places.


I have found great pleasure exploring these melodic shapes in the form of studies. The great range of expression that they demand from the player - dynamics, timbre, articulation, phrasing, and ornamentation, helps develop musical creativity along with instrumental mastery. Like Bach's Suites and Partitas, Telemann's Fantasies, or the inspired improvisations of Steve Lacy, they will give wings to the apprentice improviser who makes them part of his or her repertoire and daily routine of study. The freedom that these pieces awake can reveal to each musician a path towards creating original melodies.

Jeff Gardner was born in New York and moved to Brasil in 2002. After classical piano lessons with Ruth Schontal and Ivan Tcherepnin he studied jazz with Jaki Byard, Charles Banacos, Don Friedman and John Lewis, and harmony with Nadia Boulanger. He has performed with such musicians as [...]