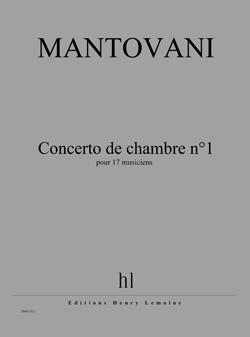 Between 2006 and 2009, I was primarily concerned with writing for orchestra (Time Stretch, Finale, Concerto for two violas) and with the idea of narration (several choral pieces, my opera l'Autre côté after Alfred Kubin, my ballet Siddharta). When the Berlin Philharmonic asked me to write a piece for an ensemble of about fifteen players, without a specific dramaturgical premise, I immediately grasped the chance to return to a more theoretical form, assuming that this would provide an opportunity for my language to evolve, to try new things. I composed Chamber Concerto #1 while taking a break from work on my second opera (inspired by the life of poet Anna Akhmatova), and I found the lack of a libretto (something I had not known during the past two years) an insurmountable obstacle. Completely blocked by the empty pages, I realised that even in the context of "pure music", I needed to consider the work as a logical sequence of events, in the sense of developing identifiable and distinguishable, "musical characters" (according to Messiaen's terminology), which would affect listening due to their luxuriance, but also through their simplicity (which is rather rare for me).
Several very basic motifs emerged during the numerous preparatory sketches: a fused scale, and chords that metamorphose into others through microtonal glissandi. In order to unify these two ideas, I thought of an initial explosion, of an element that could engender these elements, and I decided to couple each wind instrument with a resonant percussion instrument, so that the impact would appear as the trigger of effusive formulas.
But, it is above all in the area of form that I attempted to renew my language. I tried, despite a certain overall energy, to work on the idea of waiting, as if for once in my sores, the directions were less linear, less based on progression. The elements refute each other more than they extrapolate from each other, an extremely new texture appears midway through the piece (with a clarinettist and a violinist moving to two distant places on the stage to create an interplay of echoes), and the end favours the repetition of obsessional motifs, broken up by silence. In the end, the Chamber Concerto #1 is definitely my least "logical" piece and the most troubling, having the equilibrium emerge from continual surprises (I think notably of the cadence played by the two sets of tubular bells, heralding the coda).