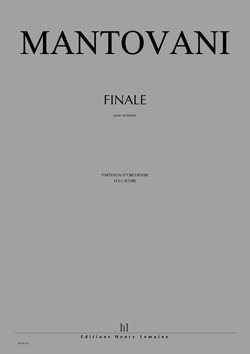 By the greatest fluke, in 2007 the two principal European orchestral conducting competitions proposed that I write an original work, which would be a requirement for the candidates. Finding the coincidence particularly amusing, I thought that these two works should at the same time be very different (the similarity of the projects prompting me to renew myself from one piece to the next) but also, and why not, to be the first two pillars of a future cycle. For the first, Time stretch (on Gesualdo), commissioned by the Bamberg Symphony Orchestra for the Mahler Competition, I decided to make a reference to the great renaissance composer through using chromatic harmonies from one of his madrigals. For the second, Finale, it is a matter of not writing from any given reference, and creating my own original references. The recurrence of certain motives in the first flute part thus structures a very free, very rhapsodic form based on the contrast between stationary moments, (slow loops, ostinati, static held notes) and other very energetic, elusive or highly developed moments. The title of the piece, beyond the fact that it refers to the final round of the 50th Besançon International Competition that commissioned the work, tends, with this eventful quarter hour, to give the cycle (currently containing only two sections) a conclusive character. This is exactly what I attempted to create: a jubilatory feeling that marks a point of no return, and above all, an impression of an outcome, of resolution.