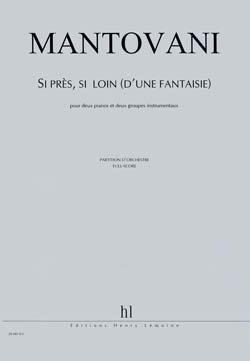 in memory of Gyorgy Ligeti

Si près, si loin (d'une fantaisie)
So near, so far (from a fantasy)

The initial motivation of this piece, composed in 2006, was to join two problematics which I have been working on since my earliest compositions: the demultiplication of space and the notion of the concerto. Receptive in general to all that can generate conflict, but wishing to move beyond the soloist/orchestra dialectic that I have already developed, I decided to have a double-soloist confront two relatively similar ensembles (as in Eclair de lune, composed in 2007, where three snare drums occupy three different places on stage in front of three small instrumental groups, or as in the Concerto pour deux altos from 2007). In this case, the two pianos function in the sense both of relay (and of spatial confrontation) and of amplification (one of the two instruments modifies the timbre of the other by doubling certain notes).
Beginning to compose the work was particularly difficult for me - so much as a fundamental hiatus existed between the amusing and spectacular aspects of the multiple confrontations between the soloists and ensembles or between groups placed in different places on stage, and my desire to write an internalized and succinct work. Though the initial instrumentation could provide me with luxuriant material, work on the elaboration of a unified dramaturgy was hampered by the rhapsodic character inferred by the very genre of a double concerto. Soon confronted by the impossibility of synthesizing these two aspects (the extravagance of the material and the directionality of the form) along the same and single path, I prepared myself for putting the project radically into question, when on June 12, 2006, György Ligeti died. This disappearance obviously overwhelmed me, and then, when once again reflecting on this composer's works, I remarked that he had notably been the master in the art of solving the problematic that had become my own.
I thus imagined a dramaturgy that started with dazzling piano figures, rapid relays, and contradictory shocks of energy, but which progressively distance themselves from these initial gestures, giving rise to tentative, more continuous, even more static textures. This is the path that led to the title of this work, dedicated of course to György Ligeti.