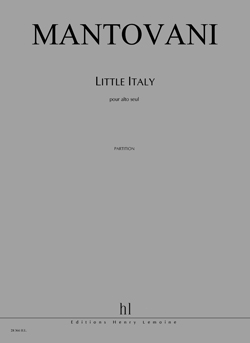 I did not write Little Italy "for" the viola, but "against" it! The main issue here is the creation of dense polyphony for an instrument that is generally treated melodically. The illusion of a double or triple discourse can be made by several different procedures: either by the setting up of multiple planes (percussive attacks, fallowed by reverberation-like resonance), or by the interruption of a regular figure by a cell in another mode of play (the rapid passage from one idea to another creating an effect of simultaneity), or by the superimposition of differing periodicities (four, each being restricted to one string of the instrument). Although the end of the piece presents a lyrical melody that reveals my passion for the ambiguous, warm tones of the viola, the form is articulated here by a clash of energetic musical ideas, demanding immense technical ability from the performer. It also finds continuity in certain process effects (progressive distortion of material), notably on the rhythmic level. The title refers to a culturally polyphonic quarter of New York, but it especially evokes the fact that the composition of this work started in that American city and was completed in Rome.
This work was commissioned by the Vivace Arte Association for the Moments Musicaux of La Baule.