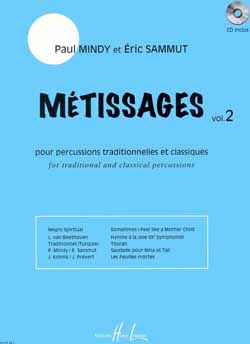 Métissages (Crossings) grew out of the artistic encounter between Paul Mindy and Eric Sammut. It was only natural that these two musicians, both passionate about teaching, would want to create a bridge between classes of traditional and classical percussion. The pieces presented in this album are of varied styles, covering a large range of music: classical, traditional, original. Each one possesses indisputable pedagogical value, as much from a technical or interpretative point of view, as for providing stylistic knowledge.

The percussionist and singer Paul Mindy, teacher at the National Regional Conservatory in Aubervilliers-la-Courneuve, is a specialist in Brazilian music. He gives masterclasses the world over. He received the Georges Brassens Prize and has sung at the Olympia in Paris. ln addition, he was awarded the Assemblée Nationale Prize in 2001, and in 2002 received the Académie Charles Cros Prize. His talent as a percussionist has lead him to play with renowned musicians such as Richard Galliano, Roland Dyens, Carlo Rizzo, Frank Tortillier. Dave Samuel, Baden Powell... He also plays with the group "Quai n° 5", the Peace Orchestra, and Flavio Esposito. Recent recordings include solo albums (Le monde à l'envers, Mosaïque), a trio with J.C. Hoarau and A. Vérité (Notre Brésil), an album with singer Fabienne Magnant (Canto instrumental), a DVD "method for African, Brazilian, and Cuban percussion" (internet site www.drumvision.fr.st). Paul Mindy has also written popular CD-books for the editor Didier Jeunesse: A l'ombre de l'olivier, Comptines du Baobab, Papagaio, Comptines créoles... ln 2006, he performed in the Percpan festival in Salvador de Bahia.

Eric Sammut began his musical education by studying the piano, and later attended percussion classes with Michel Ventula at the National Regional Conservatory (NRC) in Toulouse. ln 1989, the same year that he received a unanimous first prize from the National Conservatory in Lyon as a student of François Dupin and Georges van Gucht, Eric Sammut became principal percussionist with the Orchestre de l'Opéra National de Lyon. ln 1995, after receiving the First International Marimba Prize of New York, he undertook a ecital tour and gave masterclasses in the United States, Europe and Japan. He began teaching marimba at the NRC in Toulouse in 1997, as well as at the NRC in Paris and the Royal Academy of London, in addition to being principal with the Orchestre de Paris. After participating in numerous CD and video productions with the Orchestre du Capitole de Toulouse, Orchestre National de Bordeaux-Aquitaine, Orchestre National de Lyon and Orchestre de Paris, in 2005, he produced "Four- Mallet Ballet", an album for solo marimba. A new CD recording is planned for 2006 with the musicians Philippe Berrod, Eric Echampard and David Patrois.

Sometimes I feel like a Mother Child
Classical perc: the marimba brings the melody out of the ternary flow - the vibraphone chords should be played in a profound and colourful manner - the bass marimba should be rhythmically synchronised with the traditional perc. Traditional perc: co-ordination practice on the kenkeni, sangbang and doumdoum - each musician should practice each part individually. The ensemble work on kenkeni, sang bang and doumdoum enhances polyrhythmic perception

Ode to Joy
Classical perc: the marimba has an open section that allows the performer to play freely in the D Major mode - as for the vibraphone, it provides the brilliant and joyful character - the bass marimba has a polyrhythmic role of 3 against 4 with the bell. Traditional perc: the goal of this piece is to become familiar with the bell rhythm, found all along the "slave route" from Africa to South America

Saudade pour Nina et Tali
Classical perc: the triangle and caxi xi provide the rhythmic style for this music - the keyboards should keep this in mind when performing. Traditional perc: performance technique on the baiao, a rhythm from the Nordest (Brazil).

You can download the bass marimba part here: 28357.pdf