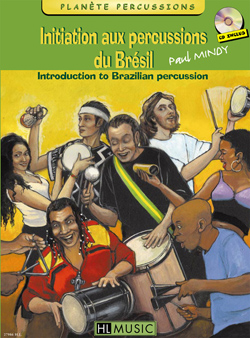 When I first fell in love with Brazilian music, I wanted to learn how to play the instruments. At that time, however, there were no teachers nor any instruments on which practice, only a handful of recordings of Brazilian musicians whom I could only very rarely see performing. That period of my life became one big question mark - how could I learn to play, how could I interpret the music, how could I learn about it, and how could I make the instruments myself ? There was only one answer, and that was to go to Brazil and study there, to try to absorb the musical language of oral tradition, assimilating it and trying to write it own despite the limits of written notation. This book is the result of thirty years of intense artistic experience, travelling and teaching, a written account of my impressions of Brazilian instruments and percussion.


The percussionist and singer Paul Mindy teaches in the Conservatoire of Aubervilliers - La Courneuve, near Paris, specialising in Brazilian music. He takes several masterclasses throughout the world (including the Paris Conservatoire, Lyon, Monaco and Recife). Paul Mindy was awarded the George Brassens prize, and has sung at the Olympia theatre in Paris. In 2001 he won the Assemblée Nationale prize, followed in 2002 by the Académie Charles Cros prize for arranging. He has taken part in several recordings.