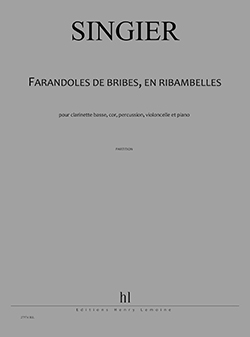 For the composer, finding a title for a work is a way of anchoring it in the world of language and paying tribute to the world of human beings, to the world of adults. Jean-Marc Singier is not only a linguistic iconoclast but also a glutton for words. For him, every title is the smallest common denominator of the work in question, as if it had been copied from an algorithm. Any attempt at explaining the title would in his eyes fall by the wayside, just as any attempt to transform it into a metaphor would lead one to fatally rudderless linguistic nonsense. Both title and work must obey the same logic, so that the listener takes in first the wordplay in Jean-Marc Singier's world of sound (the alliteration and repeated phonemes) before absorbing the exact sequences. This homeomorphism between the title and the work is a rigorous act of modesty, and at the same time a silent gesture of defiance with regard to culture as a means of social distinction, for Jean-Marc Singier does not see music as a cultural object. The untutored aspect of listening seems to be a decisive point in his life as a composer. Such an attitude implies a way of "composing" a title that breaks with the tradition of second-hand literary references. And surely this strategy is, after all, a way for Jean-Marc Singier to protect music from the world of adults, enabling him to rediscover the initial senses of the child that is in us all.