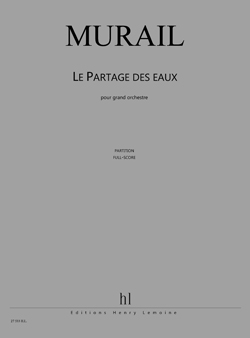 It was with Le Partage des Eaux that I began studying highly complex sounds - noisy sounds, natural sounds. This exploration continued in a more systematic way with Bois Flotté (sea sounds, the sounds of strings played with extreme bow pressure), as well as with Winter fragments (tamtams, chanting voice).
The sounds analysed in Le Partage des Eaux are derived from natural phenomena: a wave breaking gently on the shore, the effect of a backwash. They inspire the piece's shapes and sounds, sometimes by using data analysis directly, sometimes more metaphorically. One musical object, heard often in various forms throughout the score, comes thus from the spectral analysis of a breaking wave. This object is manipulated, transformed, expanded or compressed in many ways. It contains strangely coloured and strangely coherent harmonic-timbres. In slow motion, it becomes a sluggish somewhat obsessional melodic-harmonic element that while defining the piece, is often interrupted by other musical structures.
The "backwash", as revealed by spectral analysis, is heard three times. It contains typically aquatic rhythms and amplitude changes - like sorts of sound splashes - and very scattered (quasi "chaotic") pitches. The third time, the "backwash" is "tuned" over a large orchestral spectrum that stabilizes it harmonically, while at the same time endowing it with a distant and nostalgic quality. The rest of the piece's musical structures - those emerging from a metaphysical perspective, and others with more abstract origins - often produce powerful movement within the orchestra, as rendered possible by the chosen instrumentation: woodwinds by 4, 6 horns...
Listening to Le Partage des Eaux readily reveals that one of my principal preoccupations was refinement of the orchestral timbre, more precisely and perhaps more clearly stated, of sound synthesis, the synthesis that makes given orchestra and "spectral" compositional methods possible. In fact, I tried to find an orchestral sound that was both new, and yet somehow linked to the period of "grand orchestration" (the orchestra at the end of the 19th and beginning of the 20th century). An example: the frequent opposition between "opulent" orchestral combinations (as Charles Koechlin would have said) and strange and penetrating solo strings. The strings are of course primarily used to enhance certain micro-interval melodic motion... but their use in the orchestra sometimes evokes the music that I referred to earlier. References to Debussy or Ravel will no doubt be made, because people want to make an impressionist composer out of me by any means - as for myself, I thought more often of Strauss (Richard) when I was working on the orchestration of the piece... The synthesized sounds are however also combined with instruments. The synthesizer used in the first version (a Yamaha TX816) is at times played directly by a keyboard player, and at other times controlled by a computer, when it is a question of producing musical structures too complex to be played by a human being. The role of the synthesized sounds is to complete the orchestration (simulating, for example, a quartertone harp or vibraphone), or to clarify, enrich or smooth the sonic textures. Rather than being perceived as such, they are totally integrated into the orchestration. I see this as the initial steps toward the concept of "a computer assisted orchestra"...
Le Partage des Eaux: the title can be understood in various ways - metaphorically (acoustic analysis of aquatic motion), geographically (the watershed), psychologically (life's separations)... Any of these definitions suit me, with the exception of another one, which I insist upon clarifying because I have often been asked the question: no, it is not a symphonic poem based on the Hebrew crossing of the Red Sea to escape Pharaoh!