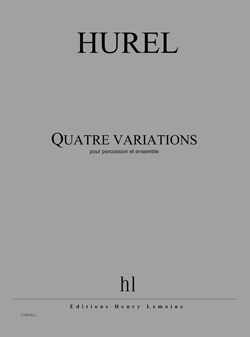 Philippe Hurel's output is also characterised by a network of relationships between his various works, where one composition knowingly winks at another, even making a self-borrowing. In the present score, there is a very short quotation from his recent Tombeau in memoriam Gérard Grisey, for piano and percussion. Other references to the leader of "spectral music" can be heard either directly, as in the evocation of the rhythmic pattern at the start of Vortex Termporum, or indirectly. In the latter case the reference may appear less obvious, but in fact it runs deeper, reproducing a general approach to composition, involving first a deliberate thinning out of the material, for Hurel, who until now has seldom checked his flow, here prefers a less rich material that exposes the instruments.
Then there is a great creative freedom that results from the composer's recently self-imposed liberation of techniques and systems his increasingly pronounced use of the variation form and repetitive loops which hitherto had been delicately traced and the freedom with which he uses the most diverse material and techniques. All these elements are potential signposts to a new maturity of style.