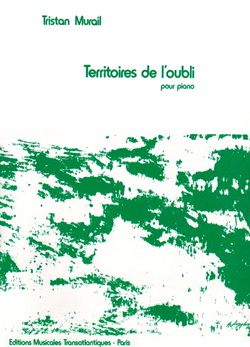 Territoires de l'oubli was written in 1977 for the French composer-pianist Michaël Levinas, who gave the first performance in Rome, in 1978. This piece, Murail's longest single-movement work to date, is a massive exploration of the piano's resonance, unfolding in a huge curve of continuously evolving textures. Murail has remarked of the piece that "instead of considering the piano as a mere percussion instrument (hammers hitting strings), Territoires emphasizes a different idiomatic characteristic of the instrument: a group of strings whose vibration is caused by sympathetic resonance or by direct action of the hammers." Murail further notes that the work is written "for the resonances, not the attacks which are considered as "scars" on the continuum." For this reason, the sustaining pedal is held down throughout the entire piece. The work perpetually slides between regular, repetitive moments of stability, and chaotic, dense textures which often approach noise. The most stable moments often make a special feature of iambic, "heart-beat" rhythms. The work constantly plays upon the ambiguity between harmony and timbre - the harmony is chosen according to the resonance characteristics of the piano, producing several striking transformations of the piano's sound: for example, at the end of the work, a form of "vibrato" is obtained by playing a fundamental simultaneously with an E-flat acting as its seventh harmonic. The true intonation of the seventh harmonic, heard in the resonance of the fundamental, beats against the equally tempered E-flat in the piano's tuning. At several points in the piece, clusters of deep bass notes are heard, producing a mass of higher harmonics which form the basis of the harmony of the following section: in this way a continuous harmonic "chain" is built through out the work. The extreme continuity of Territoires does not prevent it from being one of Murail's most evocative and dramatic pieces, especially in the wild cadenza of descending and ascending chords near the end.