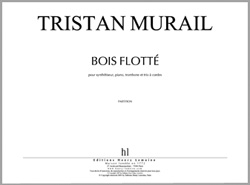 Written for trombone, string trio, piano and synthesized sounds played live on a MIDI keyboard, the piece is a sequel to Le Partage des eaux (1995), for large orchestra.
The title was suggested by a piece of wood that you pick up on the shore, washed up by the waves, and which reveals unexpected forms sculpted by the water - a natural sculpture therefore, an objet trouvé.
The musical material comes from the spectral analysis of sea sounds - waves, the swell, undertow - that one hears in the course of the work. Analysis reveals that these chaotic nature sounds contain organized structures that can serve as a model of musical construction. Murail goes more deeply into a technique already experimented with in l'Esprit des dunes (1993-94). Thanks to the "Audiosculpt" software, the composer can explore the inner structures of sound. These data are then expressed in musical notation by the "Patchwork" software programme.
From the formal point of view, the piece is made up of a long introductory sequence and seven sections. Right from the start, the listener is plunged into a mysterious sound world in which sheets of synthesized sounds, alternating with slots of silence, express a state of waiting or expectation. The first string sounds emerge without the ear being able to distinguish clearly whether they are sounds of instrumental origin: the fusion is perfect. This timeless space is discretely punctuated by wave sounds, coloured by interventions of synthesized sounds close to a glockenspiel. The instrumental sound of the strings emerging from the synthetic expanse results in a sudden dive, marked by the entrance of the piano, into an underwater world, suggested by a very low frequency. The trombone, a "spectral" instrument par excellence owing to its ability to reinforce fundamentals, marks the beginning of the first section. These projected instrumental waves affirm the opposition between a static world and a world in motion.
A fundamental of E, sent back and forth between the trombone and cello, marks out the third section in the course of which the strings play saturated sounds produced by extreme pressure of the bow close to the bridge, whereas a five-note motif, in which two tritones stand out, announces the fourth section.
At the centre of the piece, highly apparent melodic contours, played by the viola, produce a remarkable lyric effect. Through this figure against background motif, Murail breaks, in a certain way, with the large, continuous webs of the early works. This poetic, colourful universe recalls certain passages of Webern's Opus 10 or Messiaen's Couleurs de la cité céleste.
A new agitated movement, whose electronic sounds become more vivid, occupies the fifth and sixth sections, and the piece ends with a final unleashing, marked by the trombone's fundamentals E and B flat, as if mirroring the third section.
Starting from the form of a breaking wave, Murail derives the whole piece from it. Here, sound is observed as if through a powerful microscope. Through stretching, filtering and transposition, the different treatments allow for transmuting the crushed sound of the cello into a gong sonority or else drawing the writing of "bell" sounds from the initial sound. With Bois flotté, Murail reaches a new stage in the relationship of instrumental sound with electronic sound, in the analysis of sound, phenomena as much as in his writing technique.