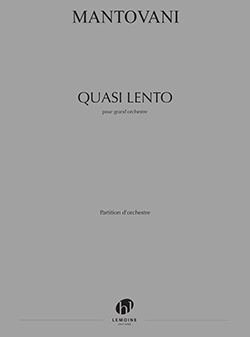 The concerto has always been the genre where I feel most comfortable. The rhetoric of virtuosity being a strong force in my dramatic orientation, the conflictual relationship between a loquacious soloist and an ensemble is an important narrative element in my language. Even in "democratic" ensembles like a string quartet or a symphony, I like to play with opposition and contrast. In this new work, the clarinet, my preferred instrument, occupies an ambiguous role. In fact, it is both a member of the orchestra and a recurring soloist.
The model is openly acknowledged: it is Claude Debussy's Prélude à l'après-midi d'un faune. As in that piece of reference, the principal instrument guides the discourse and influences the general texture of a huge orchestra, constantly oscillating between chamber music and sonic gigantism. The piece would have never seen the light of day without the inspiring sonority of David Minetti, with whom I have had the continuous pleasure of working with for several years.