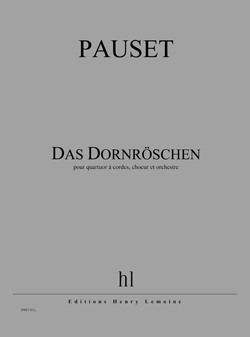 Sleeping Beauty, one of the most famous fairytales by the Brothers Grimm, has been the object of numerous analyses, commentaries and paraphrases of all sorts. its motifs, typical of the genre (pact, symbolism of numbers, destiny, curse, closed spatiality) abound in the raw, compact text of the 1812 version, the one l have chosen amongst the seven dating from 1812 to 1857. The themes of suspended temporality (the entire castle plunged into sleep) and fragile beauty are less common but quite inspiring, musically.
The "cast" implemented (string quartet, double chorus and orchestra) is thought of as a setup derived from opera, The principle of the subject is concentrated in the solo string quartet, the double chorus being in charge of narration, whereas the orchestra is entrusted with numerous madrigalisms allotted to the transcription of concrete actions: climbing the staircase, the spinning, etc. Of course, particular cases will jeopardise this fine construction.
in the framework of my "critical exegesis" work vis-à-vis the question of the stage, this project is an attempt at creating music that takes charge of a large number of forces normally in play in the framework of opera: characters, action, movements, singing, dramaturgy, stage design, set, lighting, etc. it is not a matter of inventing new metaphors but rather succeeding in transcribing the phenomena at work in the Brothers Grimm's tale through categories and purely musical objects, heavily laden with associative images: thus a music of situations and phenomena rather than representation.
Two moments of the piece were already composed in a preparatory form for double chorus (Zwei Studien uber Domröschen, 2007). The whole, lasting some 25 minutes, is divided in nine "scenes" constituting so many interpretations of the moments of organisation of the Brothers Grimm's story:

A word about the work's somewhat abrupt ending: as a good phenomenologist, I rather like considering things for exactly what they are, even if it means twisting the literary logic of a narrative in a direction that was not initially planned. That is precisely the case here. The king‘s son, following the dangerous itinerary through the corridors and rooms of the sleeping castle, finally finds the sleeping princess. Yet the text infers that the magic slumber dates from a hundred years earlier. ln all logic, the princess's face would be covered with a thick layer of dust hindering any decisive kiss. The king's son would therefore, in one way or another, have to rid the lovely face of its thick dusty layer. However (what the story does not say, but which is perfectly plausible), the unfortunate suitor is extremely asthmatic, and the necessary dusting triggers an attack that is fatal for him, End of story.