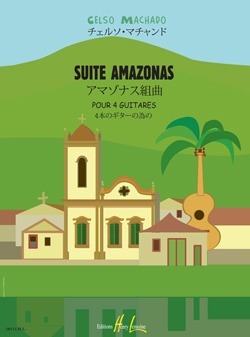 Virtuoso guitarist and percussionist, Celso Machado, brings joy to his audiences with his subtle mixture of musical inspiration and irresistible rhythm. He is widely regarded as one of the most versatile and exciting musician/composers of Brazilian music today. For over thirty years Celso Machado has been performing, recording, and teaching guitar workshops and master classes through out Brazil, Western Europe and Canada.
Born in 1953 in Ribeirão Preto, Sao Paulo, Brazil to a family of musicians - Celso and his brothers inherited the same musical tradition from their father: one foot in the classical and the other in the popular music of Brazil. The regional music of Brazil has arisen out of various blends of African, Portuguese and Indigenous influences.
While Celso Machado's compositions are rooted in his profound knowledge of these rhythmic and melodic styles they also reflect his incurable fascination with other world music traditions. Celso has recorded with many Canadian, Brazilian and European artists but can best be heard on his numerous and exquisite solo recordings. Both his 1999 recordings Jongo Lê and his 1997 Varal were nominated for the Canadian Juno Awards in the Best Global Recording category and in year 2000 his score for the documentary film In The Company of Fear won a Leo Award. His score for A Place Called Chiapas was also nominated for best musical score for documentary film in 1999.
Celso Machado currently resides in Vancouver, British Columbia, Canada.

Born at Ribeiro Preto in 1953, near São Paulo in Brazil, he studied classical guitar with Waston Brito. ln 1972, while pursuing his studies, he played in night clubs for very famous brazilian singers. [...]