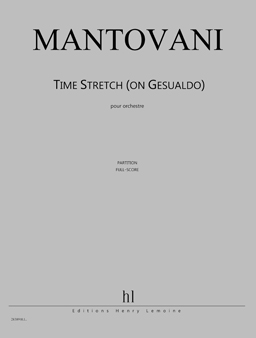 Time Stretch (on Gesualdo) takes as its starting point Gesualdo's S'io non miro non moro from Book 5 of the Madrigals. From this short piece for five voices I derived a harmonic tapestry of 130 chords, which I reworked to eliminate all elements extraneous to the act of hearing (notably octaves), and I then stretched this "grid" over the entire duration of the piece, in order to create a harmonic plan from which I started to compose.
If the chromatic tensions of Gesualdo's music are still audible in this piece, there is no question of pastiche or quotation - but rather of an original work whose main reference remains in the background.
Independent of this harmonic structure Time Stretch (on Gesualdo) returns to my own dramatical preoccupations: the search for constant energy, radical contrasts, continual transitions between conflicting episodes - but the discourse here is unified by the omnipresence of rhythmic cycles, of pulses which create a sense of inner order to music that is essentially rhapsodic.
Commissioned by the Bamberg Symphony Orchestra, which also commissioned my bass clarinet concerto Mit Ausdruck (With Expression) in 2003, Time Stretch (on Gesualdo) is dedicated to the orchestra's Principal Conductor Jonathan Nott.