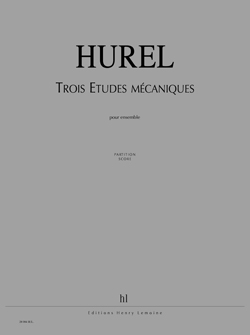 Extremely virtuosic for the instrumentalists, this piece is noteworthy for its rhythmical and obsessive, quasi-mechanical character, and strongly established microtonal harmony. The changes in acoustic and poetic perception due to variations in speed or to rapid melodic and harmonic transformations, link it to the 6 miniatures en trompe-l'oeil written in 1991.
The first etude, Bergen is a sort of rhythmical two-voice canon with the "cantus firmus" accelerating in a non-linear manner. The first rhythmic voice is played by the woodwinds, the second slower voice by the strings, integrating melodic lines obtained through ornamentation - in the baroque sense - of the generating cell. This ornamentation, obtained by adding grace notes, gives the illusion of rapidity to the strings, which in reality play the slowest voice. The percussion / synthesizer group and the brass explode from time to time into even quicker events, which open the space and perturb the "obstinate" canon by giving it a very different colour. This initial process structuring the first etude is constantly being interrupted by "digressions" whether quite rhythmical - "amusing" loops - that in becoming deformed give rise to other rhythms - or harmonic and "meditative" - that enter to breakdown the predictable quality of the discourse. The end of each section is marked by a "resynchronisation" of the voices at a threshold speed that gives the impression of a change in tempo.
Oslo, the second etude, is a variation of the first in the form of a 5-part canon calculated with the OpenMusic program developed at Ircam. The instrumental groups responsible for playing each rhythmical voice (without playing the same notes) are comprised of instruments from different families and positioned in the same area (ex: clarinets 1 and 2 with violin 1 or horn, trumpet with violin 2...) This canon is interrupted by free variations on the digressions from the first movement enabling the obstinate character of the discourse to once again be broken.
Paris, the third etude, begins in a more flexible manner, without perceptible pulsation. Long resonant chords are transformed bit by bit into a very contrapuntal style derived, as always, from the generating cell. This cell becomes progressively deformed beyond recognition, while creating, as it slows down, a sort of "klangfarbenmelodie" that acts as a "cantus firmus" during the work's coda. This jubilatory coda, despite the canonic restrictions of its style, provides a sort of rejuvenated liberty. The choice of the octave as an interval between voices, the renunciation of micro-intervals and the instrumentation by doubling, add to this "overture toward simplicity and clarity" after several minutes during which the spectral harmony ceases to be voluntarily complex.
The three Etudes mécaniques, Bergen, Oslo, and Paris, are respectively dedicated to my friends Stein Olav Henrichsen, Geir Johnson and Pierre-André Valade with whom I have had the pleasure of working for several years in the context of "Projet-Fondation 3".