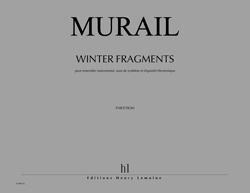 Where does the title Winter Fragments come from?
As a rule I don't like naming a piece before I've finished writing it, like counting your chickens before they're hatched. The completed piece may well differ considerably from the initial project, which is a concept, ideas, sounds and images, while the finished product is sound, organised within time. There's a gulf between the two. So this title has to be taken for what it's worth. It is at one and the same time an acknowledgement of the festival where the piece is to be created ("Sounds of winter and today"), and the experience of a genuine winter last year, particularly where we now live, to the north of New York, a region of lakes and small mountains. The lake in front of our house was frozen over, and there were sixty centimetres of snow all round. For the most part the sun shone brightly and its intense light bathed the house, which is open to nature all round. Sometimes a violent storm would arise, followed by silence, and the blinding light would come back. Perhaps the "fragments of winter" are there.
Has the instrumentation any symbolic meaning?
No! And anyway what counts is not so much the instruments themselves as the way you use them. Using exactly the same grouping (flute, clarinet, violin, cello and piano) I've written pieces which sound quite different. Winter Fragments uses the same instruments, not for symbolic reasons but for practical ones, and will sound quite different again. There are also the electronic sounds which melt into the ensemble. I am trying therefore to renew the experience of Bois Flotté for small ensemble and synthetic sounds, but in a fairly different style, with different musical and sound vocabulary. I also hope to put in more detailed work on spatialisation, with the aid of the studio at Annecy.
Could you define a successful work?
For me, a "successful" work does not necessarily mean one which is the most popular with the audience - and vice versa. Some works that I think are successful, at least in one sense, might leave a number of listeners quite puzzled. Above all, I look for evidence of a certain quality in the musical flow (and others might say this quality is "necessary", but I don't think anything should be really necessary in art). I know intuitively when I get to that stage of evidence, even though I'd find it hard to explain all the ins and outs. It is concerned with the intrinsic quality between the musical objects (such as timbre, harmony and figuration), and their position in time. There is no clear rule here, because what is at stake here is perception, the emotions aroused by these objects, the psychological effect produced by their succession, and the distortion in the perception of time created by the quality of the chosen objects as well as their immediate relationship - and so on. It is all very complex, and cannot be boiled down to some set of objective rules or pigeonholing of abstract characteristics, which would in any way be far too reduced. Finally, my ultimate aim would be to create and master an entirely personal "language" - which is not a very precise term but I use it because there's nothing better - which I could use to communicate, a language which would be as flexible and versatile as, for example, the musical idioms of the end of the tonal period, a language that would rediscover certain universal and permanent categories of musical expression, without wading through some sort of nostalgia, or taking one of the "post-modern" paths with which we are bombarded today.