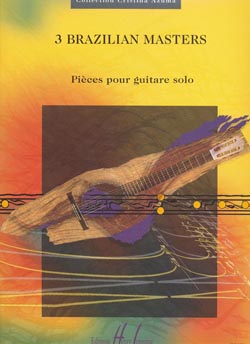 In this volume, we pay homage to three great Brazilian musicians.

Paulinho Nogueira (1929 - 2003) is one of the most important representatives of Brazilian popular music. His sensitivity, sincerity and humility have always been an example for my personal choices as a musician. He is recognisable by his touch, his swing and the inventiveness of his guitar arrangements. In Brazil, many of his compositions are extremely successful, and his live performances have always been marked by a real complicity with the audience. We present his last solo composition to date, the Soneto em mi menor.

Hamilton Costa (1922 - 2003) was one of the pillars of musical life in Brazilia, where his contribution is inseparable from the chôro. It was there that I met him and where he shared his extraordinary passion for music with me. Perfil is his only work composed for the guitar.

Celso Machado (born 1953) is above all a musician open to all existing cultures, who is capable of playing and improvising with musicians of divers outlooks and origins, on either string, percussion or wind instruments. On stage, his openness to the audience makes him a real showman. Some of his themes, such as Ponteado, which we recorded together, convey the essence of Brazilian music, in this case that of the Nordeste region.