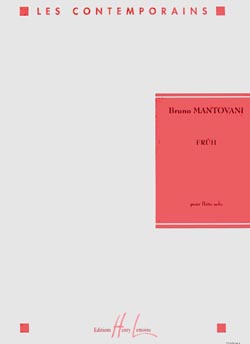 This short piece, which was composed at the request of its dedicatee Anne-Cécile Cuniot (who gave its first performance on 4 August 2001 in Cambridge), is a veritable study on the art of theatre. It is a summary of certain of my preferred musical procedures (such as brusque interruptions of a horizontal line, unstable dynamics, and fused scales), and uses different typical musical characteristics (breathy, violent sound in the high register, or an oriental-sounding micro-tonal melody) which, when they meet, can be in conflict, notably at the start of the work. Because it plays on not only the juxtaposition of contrasting episodes but also linear transformation procedures (something that I seldom do), the form of the piece is rooted in references to an identifiable repertoire. During this journey through the universe, the Middle East, French music, 1960s serial works and Asia are all evoked by the flute, an instrument that has occupied a dominant place in my recent output.