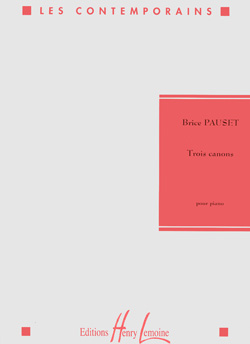 The Trois Canons were written as a swift reaction to a sudden, unexpected bereavement. Metaphorically speaking the compositional problem concerned the distance to be found between a given structural reality, totally governed by the highly automated processes of generation and the control of musical material, and the aesthetic result characterized by clear articulation, by a certain superficial evidence. The "objet d'art" conceals its deep structure in order to mingle unseen in the affective relationship between the composer and the listener within a certain mythological atmosphere which would be incompatible with the technical reality of musical writing.
Brice Pauset,
translated by Mary Criswick