In Ethers a solo flutist, playing all members of the family from bass flute to piccolo, is accompanied by a small group of five instruments, and both soloist and ensemble are accompanied by a hisses continuum of maracas. The noise element, rather than being the extreme towards which the music is pushed, is here embedded in the texture of the music from the start - Murail has not merely composed the music but the ambience within which it is perceived, as well. In Ethers, as in Mémoire/Erosion, the ensemble's music is entirely dependant on that of the soloist - but rather than deliberately destroying the soloist's material, as in the earlier piece, the ensemble here functions as the soloist's distorting mirror. Each section starts from an acoustic model proposed by the flute - the ensemble imitates this but, in so doing, distorts it progressively into a new texture which eventually provides the context for a new acoustic model from the flute. The soloists' acoustic models are, successively:
- frequence modulation sounds produced by singing into the instrument whilst playing,
-harmonic glissandi and filtering of the low C on the bass flute,
- trills,
- multiphonics,
- fluttertonguing,
- arpeggios, increasing from two to twenty-two rounds of an inharmonic spectrum (simulated phase-shifting from soloist and ensemble),
- frequency modulation (as at the start).
The listener may have trouble distinguishing these, as the music does not fall into clearly defined sections but evolves as a continuous curve of sound. An important hallmark of this curve is the constantly sliding tempo of the music, causing the sounds to be pulverised into grain (as in the huge central acceleration) or to be elongated into an entire section (as in the preceding passage). In this sense, Ethers is "a study in relativity" as Murail has said, an examination of the relations between speeds and sounds in a perpetually unstable environment. 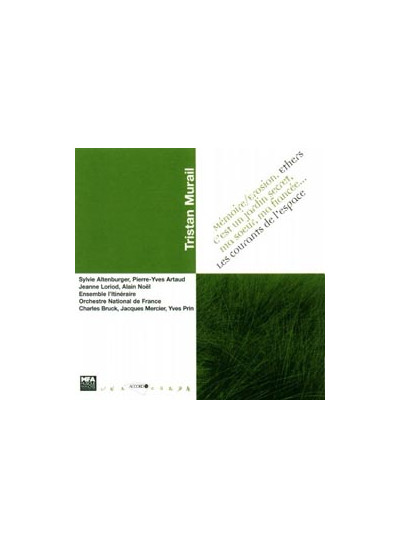