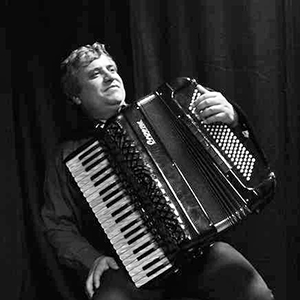 Born in Lezhe (Albania), 10th of august 1968, in a family of singers and traditional musicians. He took his first steps as a musician at the age of 5 years on the çifteli (lute with 2 chords).
Later, he studied clarinet, horn and accordion.
Has Belgian-Albanian nationality. Owner of the 1st price for accordion at the conservatories of Tirana and Brussels. He plays many albanian instruments, such as Lahuta, çifteli... and rhapsodes many traditional lyrics. His music and his singing are rooted in balkan traditions.
At the same time, he also masters a huge repertoire of popular and classical music. He performs as a solo artist or with the accompany of other musicians. "Lule bore Quartet", for example, one of Gjovalins formations, was chosen by the RTBF emission "Le monde est un village" as one of the 5 best music groups (2004).
Gjovalin also won the 2nd price for traditional a capella chant - Trévise (1995).
He is the founder of the project "Tirana-Brussels" "festival Balkan-Trafic" - Beaux-Arts, Brussels (2008).