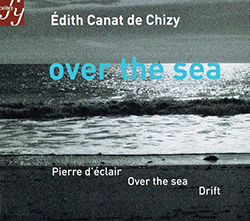 Over the sea (Solstice)

In this monographic CD, I wanted to bring together three recent works which could have in common this verse by René Char: How can we live without the unknoxn before us?"
These three scores, like some of my earlier ones, were inspired by the idea of movement/tempo/motion: a lightning gesture in Pierre d'éclair, the sphere of influence relayed by the electronics in Over the sea, and the dialectic between mobile and immobile in Drift.
In addition, all three refer to two poets, René Char and Pierre Reverdy, and a painter, Claude Monet, thus continuing my research on relationships between the arts.