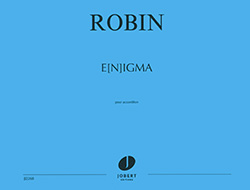 The title of a piece, whether comprised of a word, a phrase, a number, or more generically, symbols, reveals an inspiration and, as a consequence, orients listening. Every word has a meaning, a specific connotation in relation to the context in which it is being used. If we add a foreign "character" to the word/words of this/these titles, do we create a semantic gap? Do we disrupt the word’s intrinsic nature? Does the title of this piece, E[n]igma, contain a hidden mystery simply due to having imprisoned the second letter between brackets, the [n]? Why were these "brackets" added? What is the connotation, the meaning? What do they infer?
Providing a response to these unanswered questions interrupts the charm produced by that unresolved enigma. It is rather up to each person to discover the hidden meaning, by listening... E[n]igma is a joint commission from the Casa da Mùsica Foundation (Porto), the Calouste Gulbenkian Foundation and the Luxembourg Philharmonie with support from Echo (European Concert Hall Organization). This piece for solo accordion was written for João Barradas, a young Portuguese accordionist, winner of the Echo Rising Star competition in 2018.