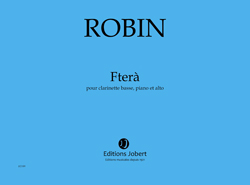 Though it has been absent several months for restoration, the Winged Victory of Samothrace, an imposing Greek sculpture dating from the Hellenistic period, remains in collective memory as one of the most important works at the Louvre. This Victory, which seems to have always been present as an integral part of the museum's architecture, rises majestically at the intersection of monumental stairways. It is depicted with outspread wings at the moment it touches down on the bridge of a ship, and like a magic word, opens the door that leads into the maze of the museum's galleries.
In Greek, Fterà means "wings", "plumage". Wings are also inseparable from the notion of beating, of air, of breath. Beyond the idea of breath that animates this trio for bass clarinet, viola and piano, the energy of the primary material is drawn as much from pulsing, pounding gestures as from the granular sonorities of the saturated timbre(s) that are stretched and contorted like "timbre-putty" to reveal and release the actual core of the sound.
Fterà, in some ways, professes to celebrate the imminent return of this majestic and imposing sculpture, the Winged Victory of Samothrace.