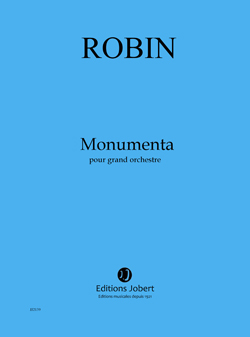 From the very instant that a person is confronted by a symphony orchestra, due to its overwhelming structure and imposing size, as much from a physical standpoint given its theatrical setting, as from an acoustic point of view resulting from its astounding sonorous possibilities, the question of monumentality goes without saying.
The orchestra, that huge ensemble of vast proportions, can, in a certain sense, be perceived as a monument in itself. It is memory, the site where compositions from the past can once again come alive in the present - these works, having established an abundant literature over time, have created codes synonymous with each epoch evolving into this sublime sound, this so characteristically and essential symphonic sound. The immense "sonic jaws" of this fabulous and phenomenal "sound factory" provide the imagination with both rich source material and sometimes the inevitable traps.
Monumenta, in its design, is conceived with each voice being treated individually - this entailed writing for ninety-five actual voices, necessarily giving the score a monumental dimension. Notating the instrumental gesture by strata, and articulating the sound on a "microtimbal" scale results in the capacity to control the orchestral gesture precisely on a "macrotimbral" scale. The great density of events making up the graphic space, thus visual, corresponds to an intense saturation of the sonic texture, with a prodigious writing system in which currents combine and collide with each other, where energies overlap and are reinforced. Gigantic masses of coloured (raw harmony), "sound effects" stretch, unfurl, slip and metamorphose - the timbres explode and multiply simultaneously through sonic hyper-activity. Monumenta is the starting point of a long cycle for orchestra in which length will also be viewed from a monumental angle.