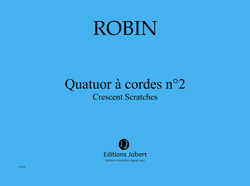 My second string quartet, Crescent Scratches, is in keeping with the continuity of the first, Scratches, without however resorting to the electronic setup that, in the first quartet, allowed me to amplify the timbres and transform the sound in real time.
The term "crescent scratch" comes from the turntable techniques ("scratch" or "scratching") developed by DJs that can be found in hip-hop and industrial music.
Crescent Scratches is based on two primary ideas: the distorted glissando (often pulsating), assimilated with "scratching", caused by moving the record forwards and backwards on the turntable, and the concept of looping that consists of reproducing the same sequence, varied or not. I devised the loops and intervened on their playing speeds, their superimposition in layers and their treatment according to timbral characteristics. As a result, the repeat point of the loops becomes practically imperceptible - a phenomena that was particularly interesting to me in this composition. The loop transforms itself into a micro-element, driving an intense activity in the macrostructure, this macrostructure itself being perceived from then on as a mass totally overloaded in events.
For me, the continuity between these two quartets lies in the domain of timbre and more precisely in the notation of the different bow positions and pressures that generate a large range of distorted sounds, and create a sort of aura around the instruments' sound. The idea of "scratch" as onomatopoeia describing a scratch, a scrape, a break or a tear also remains essential in Crescent Scratches.
Aside from the electronics, the realm where the difference between these two quartets becomes obvious, is in how the form is structured and the events are treated. Crescent Scratches is organised as a very dense block with the simultaneous treatment of the four instruments as a whole whereas, in Scratches, I linked the form in a succession of solo, duet, trio and tutti moments.
This second string quartet, Crescent Scratches, is dedicated to Raphaël Cendo.