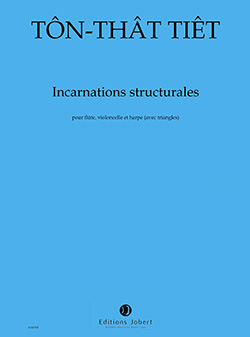 An early work for trio, Incarnations structurales (1967) was inspired by ancient forms of Indian music, its title inviting precisely to "resuscitate" them. "The music of India gives me a metaphysical sensation, it takes us into another world" says Tôn Thât Tiêt, acknowledging his enthusiasm for Alain Daniélou's works underlining how ragas and spiritual inspiration are indivisible. The four movements of the piece are almost identical in structure with a slow introduction followed by a faster (I and ll), or denser (Ill and lV) part. A quasi improvisazione Prelude introduces the various elements to be developed later on: an atonal harmony mixing modal scales and large post-webernian dissonant intervals, an ornamentation made of glissandi and quarter tones, together with sophisticated rhythms. Each instrument in turn then takes up large lyrical phrases, with a percussive and coloured support from his partners as well as a continuum accompaniment of circular motives or repeated notes. All three players display their virtuosity in broad crescendos carried by a rhythmical and syncopated energy, but this exaltation may rapidly come back to silence through contrasts of textures and progressive dynamics... The last part - Lento mistico - is calm and sober. The pointillism of the harp between extreme low and high registers sounds as if opening the ﬂute and cello's psalmody to the immensity of the universe while the sound loses any kind of materiality (harmonics, whistle tones on the harp, "bariolage" in the high register of the cello) and blends with the tinkling of triangles - an ultimate call for spirituality, towards inﬁnity.

Born in Huê in central Vietnam in 1933, Tôn-Thât Tiêt came to Paris in 1958 to study composition at the Paris Conservatoire. He attended Jean Rivier and André Jolivet classes for composition. He was at first drawn to the serial technique but from 1966 on, he turned to another mode of inspiration. [...]