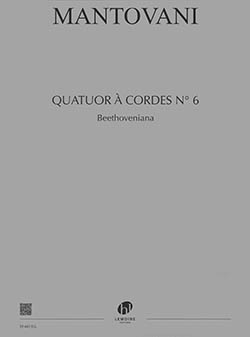 When I was a small child, it was being introduced to Beethoven's music that made me want to become a musician. His music is my compositional backbone, always answering the questions that I ask myself, never ceasing to sustain me, incarnating for me, the absolute of artistic elevation. Among Beethoven's entire production, the quartets are particularly important to me, representing the ne plus ultra of what can be composed for this ensemble.
For me, giving homage to Beethoven is practically impossible, because the relationship that I have with the composer is far too intimate, even though several years ago, I wrote a prelude to the Fourth Symphony for Riccardo Chailly and the Gewandhaus orchestra of Leipzig, and then a massive Cantata n.3 for choir and orchestra mirroring the Ninth Symphony intended for François-Xavier Roth, the Stuttgart radio choir and the SWR orchestra. For this Sixth Quartet, intimidated by the prospect of a confrontation with a corpus that for me, represents the Nirvana of musical history, I decided to turn toward a humorous project. In fact, the idea was to condense the thematic material of Beethoven's 17 opuses into 11 minutes. Thus, the various original elements respond to each other in a new chronology, with the now distorted quotations, placed in unheard of contexts.