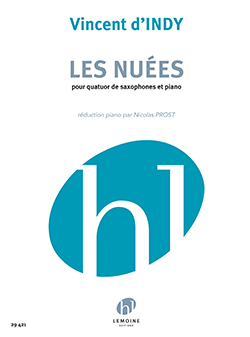 Fervaal is an opera in three acts with a prologue, composed between 1889 and 1895 by the French composer Vincent d'Indy, after the poem Axel by Esaias Tegner.
A true forgotten masterpiece, Fervaal (opus 40) was premiered in 1897 at the Théâtre de la Monnaie in Brussels. Though French, it is a powerful, seductive and totally Wagnerian score.
A short movement taken from Act II uses four saxophones (1 soprano, 2 altos, 1 tenor), which was unusual at the time considering Adolphe Sax's recent invention of the instrument. Based on the aria sung by Kaito, it is accompanied from the wings by mysterious female voices called "Les Nuées".
Each saxophone should be placed near the section of the choir that it will be doubling.
The moving white shapes of the women, "Les Nuées", made of fog, create vague harmonies with the four saxophones.
In this adaptation, which features the original saxophone parts, the piano plays melodic fragments from the orchestra as well as from Kaito's aria. This piece, Les Nuées is intended to be performed alone in concert.