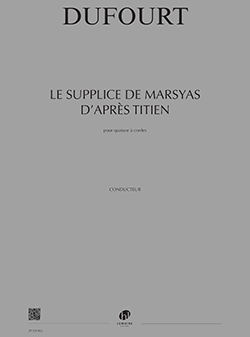 Titian painted The Punishment of Marsyas during the summer of 1576, little before his death on August 27th. This massive oil painting on canvas is found at Kromeriz, in Czechoslovakia.
According to Greek myth, it was Marsyas, the Phrygian Silenus, who invented the aulos. This double-reed chalumeau, a coarse sounding forerunner to the oboe, was reputed to induce trance states. The aulos usually accompanied possession rituals. One day Marsyas had the insolence to claim that his instrument could rival the lyre. Apollo hung the brazen fellow by his feet and skinned him alive.
The mythological story as told by Ovid, was often interpreted in the figurative style of the sixteenth century, in particular by Michelangelo and Giulio Romano. However, it was Titian who brought the scene to a hallucinating degree of violence.
Dense foliage forms the backdrop for this sinister view. In sulphur coloured obscurity, Apollo and his Scythian slave busy themselves with skinning the satyr, while an old man, who is none other than Titian himself, gazes contemplatively on. The professional composure of the Scythian executioner contrasts with the meticulous care with which the kneeling god shreds the epidermis of his victim to pieces. With seemingly restrained elation, a musician playing the viola da braccio moves his bow with the earnest air of a devotional figure. A faun discretely holds a pail, while a little dog laps at the pool of blood growing under the tortured victim's head.
Titian gives himself a role in an "image come to life". The painted world is no longer distinct from our own. We have the impression that the painter is trying to remove himself from the terrible grip of identity crushing every citizen of the Venetian Republic. Titian knows that the Venetian empire is doomed. He loathes the Italian aesthetic of compass-and-straightedge, the dull grammar of drawing, the firm and clear format that does away with time.
He used his brush like a dissecting knife and as if that were not enough, Titian mixed the colours with his fingers and manipulated them directly on the canvas. A brash torqueing movement influences the demeanour of the figures.
A leap of imagination is needed to complete the work left apparently, in an unfinished state. This forced involvement plunges the stupefied spectator into an implausible combination of excitement and horror.
The Punishment of Marsyas is a darkly ominous painting heralding a regression of civilisation far more radical than a revival to the era dominated by myth.
The musical work inspired by the painting was written for string quartet. It consists of a reflection on the cutting quality of string instruments. It would be tedious to go into a detailed explanation of how they are used, since processes of musical development elude logical laws of thought. We do however notice effects of stridency, backwash, the clash of elementary forces, swirling sequences, imperceptible movements and the intermittent occurrence of elusive shapes. Art can say nothing about the drama of compulsions, beyond outlining a few indecipherable actions here and there.
Le Supplice de Marsyas d'après Titien was commissioned by the Wiener Konzerthaus, with support from the Ernst von Siemens Foundation, Wigmore Hall, and backing from André Hoffmann, president of the Hoffman Foundation (London), the Cité de la Musique (Paris) and Pro Quartet (Paris).
The work is dedicated to the Arditti Quartet.