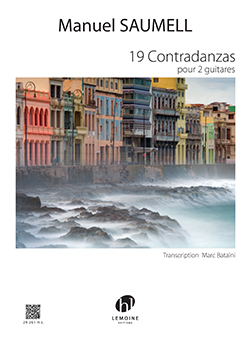 Manuel Saumell Robrero (1817-1870) was, along with Ignacio Cervantes (1847-1905), one of the most important Cuban composers of the 19th century. Born into a modest family from Havana, he studied piano privately with Louis Moreau Gottschalk and J.F. Edelmann, and composition with Mauricio Pyke. Very soon, he began working in a wide range of musical occupations: solo concerts, with a trio (with violin and cello), musical gatherings, arranging, teaching, etc. It was, however, the composition of around fifty contradanzas for piano that made him famous.

The contradanza, a genre of music and dance, is the Cuban version of the contredanse. It has origins in England (country dance), but also in France due to the arrival of French settlers fleeing the slave rebellion of 1791 and the Haitian revolution, who took refuge with their slaves at Santiago in Cuba, bringing with them not only the culture of coffee, but their music and dances as well (contredanse, menuet etc).
The country dance is done in lines, with one row of men opposite a row of ladies, whereas the contredanse (or "face to face dance") was danced in a "square" (later called the "quadrille"). The contradanza rapidly became fashionable in Cuban salons, but also in the more working class neighbourhoods of Havana. It later gave rise to the very popular danzon. The contradanzas by Mr. Saumell are little pieces, in a simple piano style, written with great economy of means. The most beautiful among them were not written to be danced to, but rather to be listened to. While respecting the strict framework of the traditional two-part structure, the composer demonstrates great melodic and rhythmical range. They are remarkable for the great contrast between the two parts: the first is always very close to classical European forms, while the second is invariably creole due to the use of rhythmical figures characteristic of Cuban music: habanera, tresillo (triplet), cinquillo (quintuplet). Luisiana is noteworthy example, with a first section written almost like early music that serves as an introduction to the second section filled with very typical creole rhythms.

Manuel Saumell lived on the fringes of the bourgeois salons in the Cuban capitol where fashionable music, dominated by virtuosity and superficial brilliance, was played. In his miniatures, he unites profoundly classical writing and a strong sentiment of Cuban nationalism. In La musique à Cuba (Gallimard, 1985) Alejo Carpentier states, "Thanks to him, the constituent elements of Cuban identity that had been scattered in the surrounding environment or confined to dancehalls, were notated and improved, to form a complex musical body. Thanks to the interpretive work done by Saumell, popular elements began to nourish conscious musical thought. It evolved from basic rhythmical instinct to the consciousness of a style. The idea of nationalism was born."

We dedicate this work to the Isabelle Chomet-Bertrand Cazé Duet who recorded the danzas cubanas that are found in free-streaming on www.musishop.fr and www.duochometcaze.com.

Duo transcriptions of appealing Cuban piano pieces
Manuel Saumell Robredo (1818-1870) was a Cuban pianist/composer who is credited as being the ﬁrst musician to promote Cuban musical nationalism. His main style of composition was based on the contradanza, the Spanish/South American form of the contradanse, a popular type of dance from the 18th century originating from the English country dance. It was the ﬁrst type of Cuban dance music to gain international popularity, and Saumell composed around 50 contradanzas for piano.
I admit to never having heard of this composer before playing through this collection, but throughout the research for this review I came across many wonderful piano performances of his music, all of which I found extremely attractive.
All of these guitar duet arrangements by Marc Bataini are well-thought-out, with the parts shared equally between the two players, and for the advanced duo, most of this music should fall neatly under the ﬁngers easily enough. Rhythmically, the music is very appealing, and from a musical viewpoint, two or three pieces stand out easily from the rest in their melodic and harmonic inventiveness. A short "set" for recital use could easily be assembled from these pieces.
The book does not have separate parts for each player but is quite readable for two players. The only niggle I have about this is that, compared with the music played in its original format for piano, these two-guitar versions don't come close to doing the music full justice.