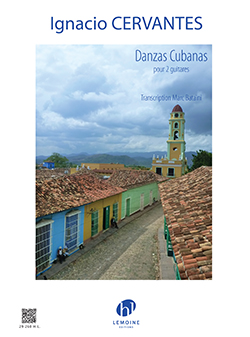 Ignacio Cervantes (1847-1905) was probably the most important and the most influential Cuban composer of the 19th century.
Coming from a bourgeois creole background, he received rudimentary musical training, and his first piano lessons from his father, who would always respected his son's vocation. In 1865, encouraged by the American composer Louis Moreau Gottschalk I, Cervantes came to study at the Paris Conservatory.
There, he worked with Antoine François Marmontel (the pianist and renowned pedagogue, who taught Bizet, d'Indy and Debussy) and with pianist Charles Alkan. He was awarded a 1st prize in composition in 1866, and later a 1st prize in piano. Very active in the Parisian musical scene, he befriended to Liszt and Rossini. Ignacio Cervantes returned to Cuba in 1870. The island had just begun to break loose from the tyranny of Italian opera. Enriched by his training in France, he reinvigorated and renewed the musical life of Havana. An admirable pianist (Paderewski raved about him), he performed the most important European composers during his numerous recitals (Beethoven Sonatas, works by Chopin, Mendelssohn, Liszt, as well as the Bach Preludes and Fugues).
Politically active in promoting the island's independence, Cervantes was forced into exile, first in the United States, and later in Mexico, where he was received with full honours. Though he composed an operetta, chamber music, and zarzuelas, it was his Danzas Cubanas that received, perhaps unconsciously, his best. These little pieces written for piano with an extreme economy of means, in direct lineage with Manuel Saumell (1817-1870), were clearly composed, not for dancing, but rather for listening. Of a precise, clear and essential writing style, they are brimming with Cuban national sentiment.
Concerning the importance of these danzas, we refer to Alejo Carpentier (La musique à Cuba, Gallimard, 1985): "The Danzas by Cervantes occupy, in the island's music, the same place as Grieg's Norwegian Dances or Dvorak's Slavic Dances in the music of their respective countries."

In these transcriptions for 2 guitars, performers should try to embrace what Cervantes' illustrious predecessor, Manuel Saumell, requested in his own contradanzas, namely a typically Cuban feeling: con sandunga, that is to say, with charm, grace and nimbleness.

Superb Cuban piano pieces translate well to guitar
Arguably the most famous Cuban composer of the 19th century, Ignacio Cervantes (1847-1905) spent four years of his young adult life in Paris, where he studied at the Conservatory and wrote many works for all sorts of instruments and combinations. Among them, 41 Danzas Cubanas for piano solo, 14 of which have here been arranged by Marc Bataini for two guitars. Playing through them with my duet partner, my immediate reaction was one of great surprise, as they are brilliant pieces of music, very Latin in style, and thanks to the work of Bataini, extremely well-arranged and utterly guitar-friendly - which, considering that piano pieces rarely lose their pianistic style, is a considerable achievement.
Most of them have a recognizable 16th-note, eighth-note, 16th-note grouping somewhere, and are mainly in 2/4 time. However, within that rhythmic strictness the pieces are quite contrasting and often have winning melody lines with friendly harmonies guaranteed to win over any audience. Bataini has often had to change their keys to heighten the guitaristic effect.
Every one of these pieces is lovely to play, and I could quite easily see a group of three or four making a nice contrasting set in a performance. One or two are perhaps a little short, but it would not be difﬁcult to put in a repeat section in places to make them a bit longer, with no detriment to the actual works. This ﬁne set deserves to be played.