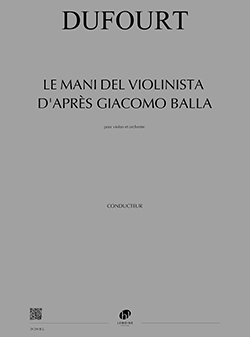 In the early 20th century, Italian futurism was the first truly avant-garde movement in Europe that rejected art in its entirety, decreed the abolition of the past and claimed to renew all aspects of human life through trying to convey the nature and problems of the modern world. The movement was launched by Marinetti in 1909, followed a year later by the manifesto of futurist painting signed by Giacomo Balla, Carlo Carrà, Umberto Boccioni and Luigi Russolo. The futurist struggle, which mobilised the heart of Italian art between 1910 and 1916, arose out of a violent polemic against the figurative tradition and the concept of image-performance. The futurist "philosophy", nurtured by an élan vital, a compelling utopia and a Dionysian fervour intended to dynamite the "antiquarian" culture of official Italy. Marinetti glorified speed, motion, noise and war, as well as cravings, madness, transgression and "the unbridling of human ambitions and desires". The innovative and visionary character of Italian futurism was nevertheless relatively sullied by its imprecations and political misleadingness.
Setting aside the reactionary orientation of the movement and its spirit of extremist insularity, we retain, among the most original features of pictorial futurism, the quest for depicting motion before the invention of cinema and before kinetic art. Inspired by the photographic sequences of Eadweard Muybridge and by the chronophotography of Etienne-Jules Marey, the Italian futurists arrived at an indisputable degree of success in the strictly figurative domain. The process of becoming is represented as is, and expands according to lines of force and developing shapes. Colour is also captured in its dynamism, with its foci and areas of dissemination.
In

, an oil painting on canvas from 1912 now in London, Giacomo Balla also engaged in an exercise of synaesthesia, attempting to transpose a process that appealed to other sensorial modes into images. The violinist's gesture, the placement of the instrument at shoulder height, the combined movements of hand and arm, the spacing and degree of pressure of the left-hand fingers, the strings beginning to vibrate, the momentum and bounce of the bow, its vivacity and precision, all of those elements that usually remain imperceptible and inseparable are thus broken down, then reunited and expressed as a single impression. The successive hand movements and indentations made by the bow are discontinuous according to pointillist procedures, then come together in an accelerated sequence and combine in the same blur that reconstitutes the unity of muscular flexion and tension. What is seen is not a realistic illusion or a catalogue of instrumental possibilities, but a summary of the speeds of the transcending enactment, showing the reflexes of a hand independent from the mechanics of its instrument.
My musical version of Giacomo Balla's painting is inspired by the characteristics of that futurist vision of art. The instrumentalist's own virtuosity, his performer's acumen, is intentionally represented like an "art of art". The score gives particular attention to the specific technique of the sonic effect, to the preciseness of the instrumental gesture when using the bow and the suppleness of shifts. The grand school of violin playing consisted of making the rough coating of the instrument's natural asperity disappear beneath a smooth and perfect surface of refined sonorities. Today this grand art is evolving due to pressure from a contemporary aesthetic more attuned to texture, and the grainier effects of the bow. Another type of virtuosity is coming to light that integrates bow strokes, accents and "distorted" sounds, into a sort of not too literal instrumental formalism. As of now, the overlap between different playing modes is of greater importance than their integration into an optimal sonority. This voracious art no longer strives for magnificence, but rather a challenge.
The score is divided into three large sections. The first is a cadenza for the soloist, focused on chords, rhythmics and the enjambments of an articulation that does not heed the metric divisions of the time signature. The second part, hellish for violinists, involves conflictual minced, crushed and contrasting contrapuntal figures, placed among all of the orchestral strings. The third part is oriented more toward the study of balanced sonorities, with a coherence that is difficult to obtain, because the notes lie in extreme or paradoxical registers. The soloist is confronted with a new kind of virtuosity, that of harmonics - groups of natural or artificial harmonics.
Commissioned by the Tibor Varga Sion Valais International Violin Competition, the score was written for the competition held in 2015.
The work is dedicated to Enzo Restagno.
Hugues Dufourt